Court stenographers in demand and in the news in Ohio, Washington, New York 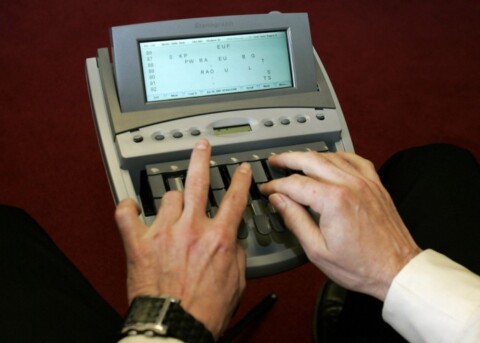 Court stenographers are critical members of the judicial process. That’s why they’re in the news and in demand.

Huseby hires only the very best stenographers. All are screened before hiring to ensure their work meets the company’s high standards. When a reporter wishes to work for Huseby, an account executive follows a stringent reporter review process.

Court stenographers in the news

An Ohio state senator has asked the state supreme court to make changes in judicial proceedings. The changes include eliminating the grand jury process in the state. If that’s not feasible, as a secondary reqest she asked that the court stenographer to be appointed by the presiding judge and not the prosecutor’s office. (The Highland County Press) | A Yakima, Washington county clerk has been accused of harming the judicial system there through her role in an agreement that allows some of her employees to work as court stenographers. (Yakima Herald) | An Al Qaeda terrorist was convicted a second time in Brooklyn Federal Court two days after it was discovered that no stenographer was present when his original verdict was taken. (New York Daily News

And right now, nothing’s much bigger than the NCAA Tournament. So, when a player made reference to the stenographer who was documenting a news conference, suddenly the stenographer wasn’t just recording the news, she WAS the news.

After his team’s win against the Oregon Ducks, Wisconsin Badger Nigel Hayes began his turn at the mike with a few words: specifically, cattywampus, onomatopoeia and Antidisestablishmentarianism.

When asked why, he said he was trying to make the stenographer’s job really interesting.

After the news conference, three Wisconsin players gathered around the stenographer and got her to explain how her machine worked. They pecked on a few keys themselves while the media took pictures and video.

The Sweet 16
Now that the teams have been narrowed down to 16, college basketball fans across the country are ready to watch their favorite teams determine the winner of the 2015 NCAA Men’s Basketball Championship tournament.

Many fans will be perched in front of their televisions, jumping from city to city via CBS, truTV, TBS and TNT.

Other lucky fans will be going in person to cities across the country. Tickets are available through the NCAA’s website here.

Here are the regional and Final Four sites and dates:

Here are our offices in or near NCAA regional sites:

If you find yourself in some of those cities with the need to balance March Madness and work, we have offices in or near most of the regional host cities and the site of the Final Four.

Need litigation support in a different city? Call a Huseby scheduler and ask. We have more than 4,000 conference room suites worldwide ready for you to use today.

In not-so-good news concerning stenographers, a U.S. House of Representatives reporter was reportedly hospitalized after taking the rostrum after the vote to end the partial government shutdown.

“He will not be mocked,” the woman said, according to an audio recording of the incident posted online by Public Radio International reporter Todd Zwillich. “This is not one nation under God. It never was.”

Read more and see the video.

Husband’s perspective In followup stories, The Daily Beast interviewed the reporter’s husband who said she had been getting up in the middle of the night in the weeks leading up to the episode. She told him the Holy Spirit was waking her, he said.

Post-incident interview In a brief interview with Reuters after returning home, she told the news service she “couldn’t be better.”

She’s now on administrative leave, according to Huffington Post.