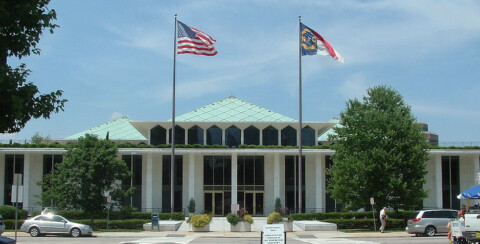 The North Carolina State Legislative Building was opened in 1963. Photo by Jayron32 via Wikimedia Commons.

North Carolina’s governor plans to sign the compromise state budget that had gotten lots of media attention for how it impacts education funding, transportation funding, historic tax credits and pay for prison guards.

One issue that hasn’t gotten much attention is funding for court reporters. Last year, court reporter pay had been cut from $2.50 per page to $1.25. This budget when signed will increase that amount to $2 per page.

That caused some reporters to leave North Carolina for other states and forced Forsyth County to shut down half of its district courtrooms, according to one report. Some prosecutors considered more plea deals as a result.

State senator Stan Bingham, a Republican from Davidson and Montgomery counties, said, “As we have on many things, we’ll try something and realize it was a mistake or we need to compromise or make changes,” said Bingham. “And that’s in effect what’s happening.” (WFMY)


Huseby Inc., provides its clients with court reporting services across the United States — including North Carolina, at these locations:

It's been 14 years since the North Carolina Supreme Court chief justice was asked to give a "State of the Judiciary" address to the state general assembly, and Chief Justice Mark Martin used the opportunity to ask or increased funding for North Carolina courts, according to news accounts.

According to The Charlotte Observer, "the woes of the system come as no surprise to lawyers who work with it."

In Mecklenberg County, court reporting has been particularly hard hit by cuts, the Observer says.

After state lawmakers cut payments to court reporters in half during the last session, Mecklenburg lost two of its seven reporters, whose transcripts are essential as cases move through the system. Now, Nuccio said, courts are forced to ask some litigants to hire their own court reporter.

A trial in Brunswick County, North Carolina was delayed last week because of a court reporter shortage, according to WWAY television in Wilmington, North Carolina.

The trial is like many across the state, the station reports. The state court reporting manager, David Jester, is quoted as saying the shortage stems from a 5 percent salary cut in North Carolina that caused many court reporters to leave the state.

"A 5 percent cut may not sound like much, but it makes it so we aren't competitive anymore," Jester told the station. "We're losing court reporters to other jurisdictions around the country."

If the shortage in North Carolina affects you or your litigation plans, Huseby, Inc. provides its clients with court reporting services across the United States — including North Carolina, at these locations: