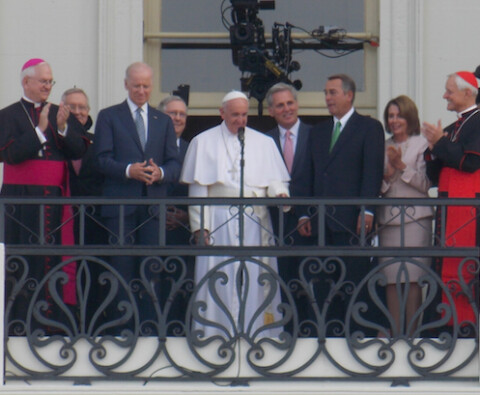 Pope Francis, Congressional leaders and Catholic leaders stand outside the Capitol after his address before a joint meeting of Congress earlier this week. (Photo via Wikimedia Commons by Farragutful.)

Whatever the big story of the day, there are smaller stories involving the insights, involvement and input of the legal community. The story of Pope Francis’ visit to the United States is given perspective in these stories of attorneys.


Up close and personal for Wisconsin lawyer

For example, a Wisconsin attorney who was “close enough to see the pontiff’s facial expressions” during his speech in the U.S. House, says the Pope spoke to Catholics and non-Catholics alike by focusing on help for the poor and a message of not leaving behind anyone who needs help.

The Pope also didn’t sound angry, the attorney said, contrasting him to Benjamin Netanyahu’s speech several months ago. The story says the attorney was a guest of a Wisconsin legislator, but didn’t say what kind of connection scored him a seat for the historic speech. (LaCross Tribune)

Philadelphia working on a contract

The Pope’s visit to Philadelphia will include a speech using the same lectern Abraham Lincoln stood behind when delivering the Gettysburg address. It’s another highly anticipated moment during the Pope’s visit to the U.S. following his visit to Washington D.C. and New York City.

One thing has Philadelphia city leaders worried, though: Late in the game there was no contract establishing who will pay for what during his visit. That’s highly unusual at this late stage, said a former city attorney, who said the city’s experience in drawing up compacts for services for large events tells him this particular event is not going as it should.

He said “It should have been signed by now.” He said it’s important because contracts should be available so the public can see what agreements the city is making and what it’s getting in return for its money. (Pittsburgh Post-Gazette)

Watch out for papal scams

She gives detailed tips for how to avoid them, with the main thrust being this: Beware of buying tickets on the secondary market. There are free tickets available to papal events, available through a lottery system. If you see tickets available on Ebay or Craigslist, it’s hard to tell if those tickets are real or not. And they’re certainly not free. So buyer beware. (MassLive)

In addition to the lawmakers involved in the rollout of the Affordable Care Act, or Obamacare (many of whom, of course, are attorneys), there are lawyers working behind the scenes and in other ways.

Among witnesses testifying before Congress was Gregory Needles, a lawyer who advises colleges on their health plans. The hearing focused on the federal health care law's impact on schools and colleges, according to Education Week.

Needles, who is with the firm of Morgan, Lewis & Bockius, testified the delay of the employer mandate provision of the law has had a minor effect on schools’ decisions about letting go of some staff, saying, “By extending a year, that’s helped them to take a more measured approach, but it’s not changing the decision that they’re [making]. Perhaps the implementation is getting delayed a fraction.”

Lawyers argue church challenge In a legal case related to the health care law, attorneys for the federal government and two Pennsylvania Catholic dioceses made final arguments this week in a challenge to the law.

The Associated Press reports Justice Department lawyer Brad Humphreys said it's up to Congress and the courts to decide whether the law imposes a substantial burden on religious freedom.

Mickey Pohl, one of the lawyers representing the dioceses, said the government shouldn't make that decision for the churches.

Response to kickback decision In a New York Times, story, attorney Kevin G. McAnaney, who specializes in health care fraud and abuse cases, commented on a surprise decision by the administration that exempts subsidized health insurance from a law that bans rebates, kickbacks, bribes and certain other financial arrangements in federal health programs.

The law makes it a crime to pay or receive anything of value in return for the referral of patients or as an inducement for people to buy goods and services reimbursed by federal health care programs.

McAnaney said the decision would allow drug companies to give coupons to people who buy insurance through the exchanges.

The Times reports those coupons subsidize co-payments and reduce out-of-pocket costs for consumers, encouraging them to use certain brand-name prescription drugs when lower-cost alternatives are available, Mr. McAnaney said. Such coupons are forbidden in Medicare.

Huseby is your career partner Huseby continues to be deeply engaged in legal issues of the day. Through that engagement, Huseby can better serve all of your litigation support needs. Anywhere you need us in the U.S. or internationally, our schedulers are available and ready to assist.

Women lag behind in leadership and other positions in the nation’s law firms, according to a story in The Washington Post.

The Post reports the ratio of women to men in law schools is nearly 50/50, but that number drops in the professional world. Four percent of law firms are led by women.

Firms turn to analytics Because of the recent recession and the rise of e-discovery and e-billing, law firms are more often using analytics to boost profits, according to InformationWeek.

Law firms’ move to hire analytics professionals have come in response to clients who want lower bills or have set legal budgets to help control costs. One example in the story involves developing ways to work profitably on a set project basis, a form of risk analysis.

"The work we've been involved with beats the firm average on profitability."

Upside, downside of shutdown The longer the government shutdown goes on, the more it will impact the nation’s lawyers and law firms, according to a Reuters report.

Firms that work with the Federal Trade Commission, the Department of Justice and the U.S. Government Accountability Office are especially impacted, the story says.

That said, there is an upside, according to one attorney who noted furloughs in the Justice Department have given private defense lawyers an advantage in some litigation because government lawyers are now incapable of working on cases.

Has the shutdown impacted you or your firm? Let us know in the comments section below or on our Facebook page.

Huseby is your career partner

Huseby continues to be deeply engaged in legal issues of the day. Through that engagement, Huseby can better serve all of your litigation support needs. Anywhere you need us in the U.S. or internationally, our schedulers are available and ready to assist.