Live from Durham: the wonders and frustrations of court reporting 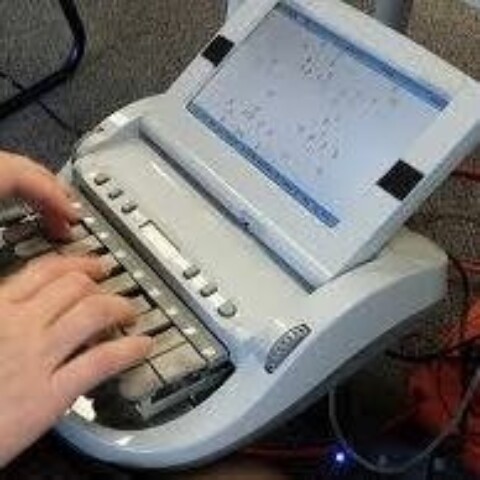 Meet Dave. Dave is a court reporter. Here’s a description of Dave. (The News & Observer) Does he sound familiar?

“Dave constantly searches for the right words, often correcting himself as he talks about the precision and impartiality to which a court reporter must adhere.”

“Dave is amusingly fussy and tentative, his obsession with details hindering his private life.”

This description of Dave the court reporter is from a review of the play, “The Typographer’s Dream” performed this month in Durham, North Carolina, at Manbites Dog Theater.

The theater’s website describes the play as a production about three experts -- a stenographer, a geographer, and a typographer -- discussing “the wonders, and occasionally the frustrations, of their chosen disciplines. But soon the line between the professional and the personal starts to blur.” (Manbites Dog)

While the play’s run has finished, keep your eye out for future productions of this show that The News & Observer says “elicits laughs at common work situations but also reveals workers’ dissatisfaction.”

Huseby Inc., provides its clients with court reporting services across the United States — including North Carolina, at these locations:

Lawyers and legal issues played supporting roles in the television shows that were nominated and won Emmys during last night’s ceremonies that aired on CBS.

The most prominent was probably the legal thread in the show “Breaking Bad,” which won the 2013 Emmy for outstanding drama. The show, starring Bryan Cranston, finishes with a much-anticipated series finale this season, but will be replaced by “Better Call Saul,” a prequel starring Bob Odenkirk as the frazzled lawyer Saul Goodman.

The show will focus on the evolution of the character, whose background is little-known in “Breaking Bad,” according to The New York Daily News.

Odenkirk and "Breaking Bad" gave some hints of that evolution, including that Goodman is from Chicago and isn’t Jewish but gave himself a Jewish name because he thought that would be better for business, according to The Daily News.

The new show doesn’t even assure Goodman “survives the holocaust” in the final episode, as Cranston put it during Emmy interviews, because the new show is a prequel, meaning it’s set before the current “Breaking Bad” series.

Liberace and Phil Spector Other nominated and winning programs involved legal themes. In “Behind the Candelabra,” Michael Douglas plays Liberace and Matt Damon plays his lover, Scott Thorson, who in real life later sued Liberace after the charismatic entertainer cast him aside for new lovers.

“Behind The Candelabra” picked up a directing award for Steven Soderbergh, a lead actor award for Michael Douglas, and the overall best miniseries Emmy.

Helen Mirren was nominated as lead actress in a miniseries or movie category for her role as a leading lawyer in the HBO drama “Phil Spector.” She didn’t win, however, as the lead actress award went to Laura Linney for Showtime’s “The Big C: Hereafter.”

The Triangle of North Carolina is made up of Raleigh and Durham and the town of Chapel Hill. It’s known for big universities, great hospitals and heated basketball rivalries. And of course, excellent law firms.

The largest law firm in the Triangle is Smith, Anderson, Blount, Dorsett, Mitchell & Jernigan, L.L.P., according to the Triangle Business Journal. Read more.

And whether your firm is big or small, Huseby has conference room suites in Raleigh ready for you to use today. Huseby offices offer litigation services, including court reporting, Web conferencing, video conferencing, video depositions, and more. Our office in the Triangle is at this location:

The rest of the Triangle top five is: