Researchers ask if robots can be paralegals and lawyers, get startling answer 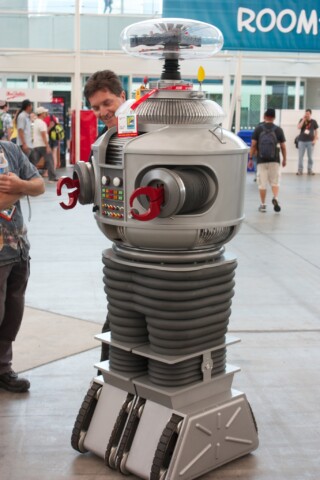 Is this your replacement? Photo by Ewen Roberts via Flickr Creative Commons.

After all, if programs can read and analyze legal documents, why pay humans to do it? Should we be wary of Legal Zoom and Rocket Lawyer?

Those are the questions posed in a recent New York Times story on artificial intelligence and the legal profession.

The story looks at the development of rapid technological advances and how they might harm the the economy. The story also looks at what recent research says about the issue and it turns out the news is … encouraging.

It’s simply not happening, the research says, in most aspects of the economy. Many human activities just can’t be replicated by computer automation. In regard to legal professionals, a study called “Can Robots Be Lawyers?” said “even the most advanced A.I. technology would at best make only modest inroads into the legal profession.”

Here are the things that paralegals and lawyers can do that automation can’t:

Robots, of course, can read documents, but the story points out that’s just a small part of the paralegal's and lawyer's work.

Six years after Congress approved a change governing how e-discovery should be handled in federal cases, several states are making decisions about the use of e-discovery in their rules of civil procedure.

Two-thirds of the states have adopted some form of these rules governing electronically stored information. Florida this week fast tracked an e-discovery amendment to its rules, and Pennsylvania adopted its rules this week as well.

Counsel often need discovery in the form of e-discovery. And because electronic data can be so fast, can be forwarded to so many people and can involve meta data, e-discovery cases typically involve more information than a paper discovery case would.

According to Knoll Ontrack, Idaho, Mississippi, New Hampshire, Texas and Utah have created independent e-discovery models that are not based on federal rules, like Pennsylvania’s. The unique Texas model influenced the amendment of the rules of civil procedure in Idaho and Mississippi.

To find Huseby locations across the United States, click here. If you don't see your city or state on the list, call a Huseby scheduler and ask. Huseby has more than 4,000 conference room suites worldwide ready for your use today.

When Lynne DeVenny received an invitation to attend a Huseby, Inc. continuing legal education course, she jumped at the chance to immerse herself further in her favorite subjects: Law and technology.

Throw in lunch and it was an unbeatable combination.

“I tell people they need to do CLEs about technology because if you don’t keep up with technology you’re behind the curve,” said Ms. DeVenny, who attended Huseby’s “Using Technology to Win -- Multimedia Depositions and Trials” on Feb. 7.

Ms. DeVenny, a North Carolina State Bar certified paralegal currently employed as a senior paralegal at Elliot Pishko Morgan P.A. in Winston-Salem, N.C., not only works to stay ahead of the curve, she helps others do the same through her popular blog, Practical Paralegalism, and as co-host of a podcast for paralegals, The Paralegal Voice at Legal Talk Network.

So she was thrilled to learn more about the latest legal technology and earn CLE credits through the course, which focused primarily on the uses and advantages of real-time technology, web conferencing remote depositions and the uses of multi-media technologies in trial. She was particularly interested to learn about TrialDirector, a software for transcript, exhibit and video management to prepare for and present cases in trial.

“I was intrigued by real-time depositions,” she said. “I came back to the office and said real-time was the way to go.”

Ms. DeVenny, who keeps her trusty iPad handy for work-related tasks, has learned legal technology changes quickly and it takes great effort to stay on top of it. She said paralegals and legal staffers can take on the role of supporting and encouraging their offices' use of technology.

At the CLE course she also took away information about using technology to present exhibits electronically at a deposition, synchronizing video with deposition testimony, and tips for how to set up and prepare technology in a courtroom. She sees great advantage in using laptops and tablets to have exhibits and other documents ready “at the touch of a button.”

“If you asked me four years ago if I’d be a techie geek, I’d have said no,” she said. “But now I make technology recommendations to our firm.”