She is a court reporter -- AND she plays one on TV: 'House of Cards' to be specific 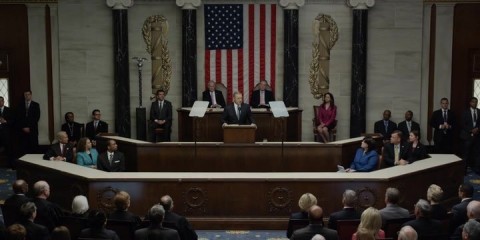 Cindy Sebo, who works for Huseby from time to time, on the set of "House of Cards."

What do you do when you’re not working as a court reporter?

Cindy Sebo, a freelance reporter from Bowie, Maryland, who works with us at Huseby, spends her out-of-work time pretending to be a court reporter.

She recently filmed a scene as a court reporter in the U.S. House of a Representatives on Neflix’s “House of Cards.” She’s transcribing Frank Underwood’s (Kevin Spacey) State of the Union speech. The agency that cast her was interested in her experience working at the real U.S. House of Representatives.

When Spacey got to the set, Sebo said, “We did the first take, and he was spot-on perfection. I was thinking, ‘Wow, we are already done in one take?’ Boy, that goes to show you how little I knew about filming. We ended up doing about 35 takes.”

Read more about Sebo’s experiences, plus those of another reporter acting the part on ABC’s “Nashville.” (JCR)

Catch Scott Huseby in the movie 'The Ultimate Life,' now showing in a theater near you

Our own Scott Huseby is ready for his close-up, and you can see it for yourself now that the movie “The Ultimate Life” has been released to theaters.

"Starring" alongside Scott are James Garner and Peter Fonda. The movie is a followup to “The Ultimate Gift” and is directed by Michael Landon Jr.

Scott plays -- what else? -- a court stenographer in the movie which was filmed in Charlotte. The movie is based on books by Jim Stovall.

Here’s Examiner.com's take on the movie:

"Michael Landon Jr. effectively captures the charming essence of author Jim Stovall's novel [in movie The Ultimate Life] to gracefully teach us to recognize the wealth reaped by one who has friends, family and love. (Thumbs Up!)"

See Scott in action at the 6:08 mark of this video about the movie.

Here’s a trailer for the movie.

More pictures and videos from the movie.

The New York Times review of the movie.

Huseby court reporting is no act When he’s not acting, Scott Huseby is busy making sure his namesake company is hiring only the very best court reporters. Each reporter is screened before hiring to ensure his or her work meets the company’s high standards. When a reporter wishes to work for Huseby, an account executive follows a stringent reporter review process.

She talked to the Albuquerque Journal about her experience working on the AMC show.

“I wanted to do the role so people could see that a court reporter is ethical and professional. The message is court reporters are not dinosaurs. We are invaluable to the legal system. Any lawyer worth his salt will tell you that.”

“Better Call Saul” is a prequel to the popular and award-winning “Breaking Bad,” which was also set in Albuquerque.

And while she took her role seriously, she also had her share of fun on the set. Read the in-depth story here. In it she talks about meeting the people behind the show, as well as why there’s a Big Gulp cup sitting next to her in the scene.

Our offices in Las Cruces are located here: