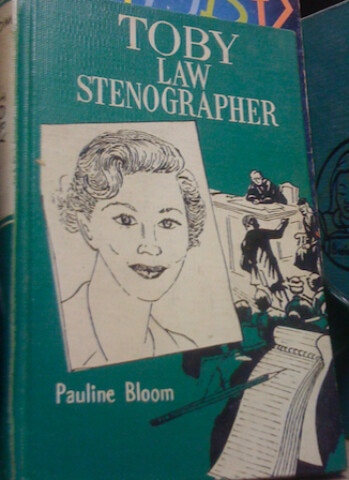 "Toby Law: Stenographer" was one in a series of career romances popular from the 1940s-1960s.

Had any romances in your career as a court reporter?

A recent story in The New York Times focuses on career romances -- but not the kind like those involving Charlie Rose and Matt Lauer.

Instead, “career romance” was a genre of books published in the 194os through the 1960s, and a stenographer was the focus of one of them. The Times reports:

There are two basic categories of career romance. The more sober variety from Julian Messner’s Career Romances for Young Moderns — “Toby Law:           Stenographer,” “Lee Devins: Copywriter” — are conscientious and informative,     often by serious writers and containing many pages of rather mind-numbingly     detailed exposition.

They’ve become collector’s items and include other subjects like physical therapist, actress and astronaut.

Here’s what Kirkus Reviews said about “Toby Law: Stenographer” in a 1959 review.

Even the barren streets of a lower middle class section of Brooklyn possess a        poignant beauty when one is just out of high school. And for Toby, a pretty girl     with a passionate love for music, Brooklyn becomes the scene of an intense     romantic conflict, on one side of which stands the egocentric composer, Toni, and on the other, Bill, a substantial young lawyer. Toby's choice, her realization that a consistent love and sharing are for her the only guarantee for contentment,  evolves through her experience as a responsible employee of a law firm, and it is  with mature assurance that she puts away childish things and assumes her role    as a woman. A really very mechanical teen-age story with a few moments of          more than surface perception. Little vocational value.

As we blogged about earlier, the very popular Sexy Stenographer archetype disappeared from movie screens in the 1930s. It had a final gasp in the 2003 film “Alex and Emma,” directed by Rob Reiner.

If the Sexy Stenographer wasn’t dead yet, this movie might have killed it. At least according to reviews and online comments.

The movie starred Luke Wilson and Kate Hudson. Wilson is a writer who is under pressure from his publisher to get a book out in one month. The New York Times’ review of the movie said, “... because Alex is experiencing a writer's block that leaves his imagination colder than this picture's, and because the enforcers have torched his computer, he hires a stenographer, the all-business Emma (Kate Hudson), in the hope that he can dictate a book to her within his allotted time.”

We’ll give you three chances to guess whether they fall in love, and the first two don’t count.

On IMDB, the discussion board of the movie is primarily about whether this is the worst movie of all time or not. (The consensus: No, not the worst of all time, but not very good, either.)

Elvis Mitchell, in the Times, said, “The picture is desperate to be a Date Night event, but it feels more like a Last Date movie.”

The movie also prompted the essay we’ve been quoting about the Sexy Stenographer. In the New York Times, Katie Bolick gives a nice rundown of the history of stenographers working with well-known novelists. including Dostoyevsky, Tolstoy and Henry James.

“Of course, the typical (and largely unexamined) history of novelists dictating to stenographers is hardly as romantic,” she says.

The book is a collection of essays and tips about making it through court reporting school written by freelancers, officials, CART captioners and current students.

“Having an amazing support system while going through your court reporting training is integral to a student’s success,” Breien is quoted as saying. She’s enrolled as a student with the iReporting Institute.

In a report on the fall of the U.S. unemployment rate to 5.9 percent, its lowest level in more than six years, the San Gabriel Valley Tribune focuses on a particularly bright spot in that bright news: Court reporting.

Although people might not be aware of court reporting as a career, it will be “ramping up locally over the next few years” the story says.

It then quotes the 2013-14 Court Reporting Industry Outlook Report which predicts that by 2018, there will be 5,500 new court reporter jobs available in the U.S., with 2,320 of those openings in California.

“Projected shortages in the stenographic court reporting profession come at a time when many graduates with traditional four-year degrees are struggling to find employment,” Jim Cudahy, executive director of the National Court Reporters Association, is quoted as saying. “Court reporting is a career path with above average job security and earning potential as compared to its more traditional counterparts. With opportunities for court reporters on the rise, students who graduate will hold more than a piece of paper — they’ll hold a job.”

A court reporter’s bout with breast cancer is the focus of an Asbury Park Press story, which recently profiled Gail Coulter who received her diagnosis as she approached her 30th year as a court stenographer.

The diagnosis of early stage II breast cancer shocked her, the story said. She never detected a lump or experienced any other symptoms of the disease, but the disease does run in her family.

Resolved to beat the disease, she began a long treatment process during which she made a career change from her job as court reporter.

Her reasons for the change were both personal and professional, and led her to a new career in the restaurant business. She’s had clean checkups since ending chemotherapy.

Huseby celebrates the work of court reporters across the country.

Huseby hires only the very best reporters. Each reporter is screened before hiring to ensure his or her work meets the company’s high standards. When a reporter wishes to work for Huseby, an account executive follows a stringent reporter review process.